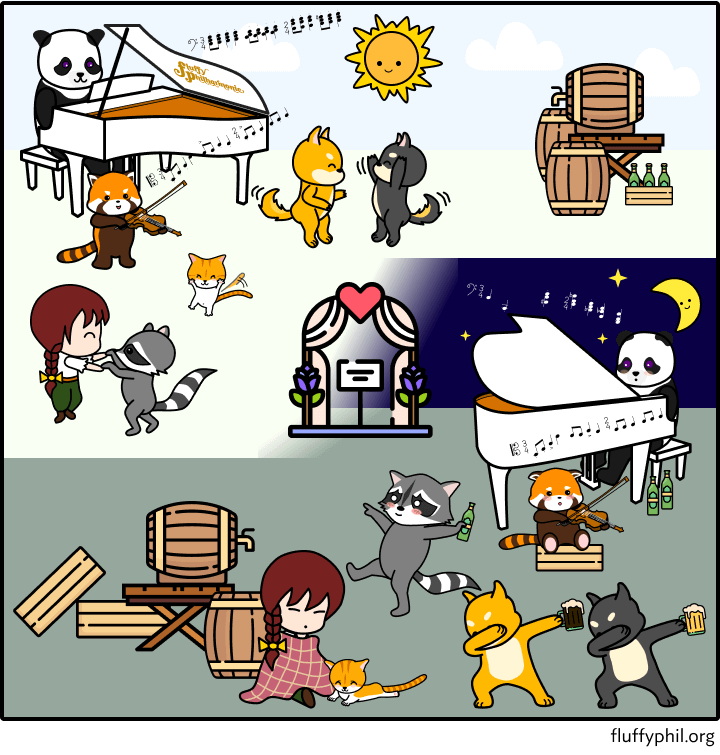 One of the blob friends grew up playing the piano, and kept pulling out piano albums for children written by famous composers, one after another. Starting from Tchaikovsky, followed by Schumann, Clementi, Bach, and so on.

The other blob friend grew up playing the violin, and had never heard of albums written specifically for children. One day, the violin blob friend ended up playing a rearranged Bartók tune for viola with her teacher and realised that even Bartók wrote not one, but two children's books (ー_ー )

Each piece is based on a folk tune, Hungarian in the first two volumes (42 pieces), and Slovak in the last two (43 pieces).

Béla Bartók was a Hungarian composer who walked many country roads and mountains with a chunky recording device and a hand-motored power generator to learn and record folk songs. Aren't you curious what he has to share with us, after listening to so many folk tunes in the Eastern European countryside? What did those tunes sound like without any influence from the realm of Western classical music?

The two blob friends played No.30, Allegro Ironico, of the Hungarian book together. In our book, the piece was titled Wedding Day and Night. Why? Well, we can't tell for sure, but here are our guesses.

The piece was written in a super fast metre with 2:3 rhythm sequences. In Ottoman music, this is referred to as Aksak. The name simply means “limping”. And in Turkish folk music, these metres occur mainly in vocal and instrumental dance music. Bartók used this rhythm in some of his serious compositions as well, such as his String Quartet No.4. It's interesting that he shared such a rhythm in his children's book as well :)

Will a Hungarian wedding be somewhere close with this piece? We don't know. Although, the music seems rather fitting for our imaginary Hungarian friend's wedding scene. In the morning, everybody enjoys a cheerful dance. But by night, heavy legs and drunken steps shift heavily from one beat to the next, and the next until… the next day?

We also don't know where the other name - Jeering Song - came from, but it sounds fitting as well. You'll only know if you play it yourself! Who are we mocking in this episode? Take a wild guess?